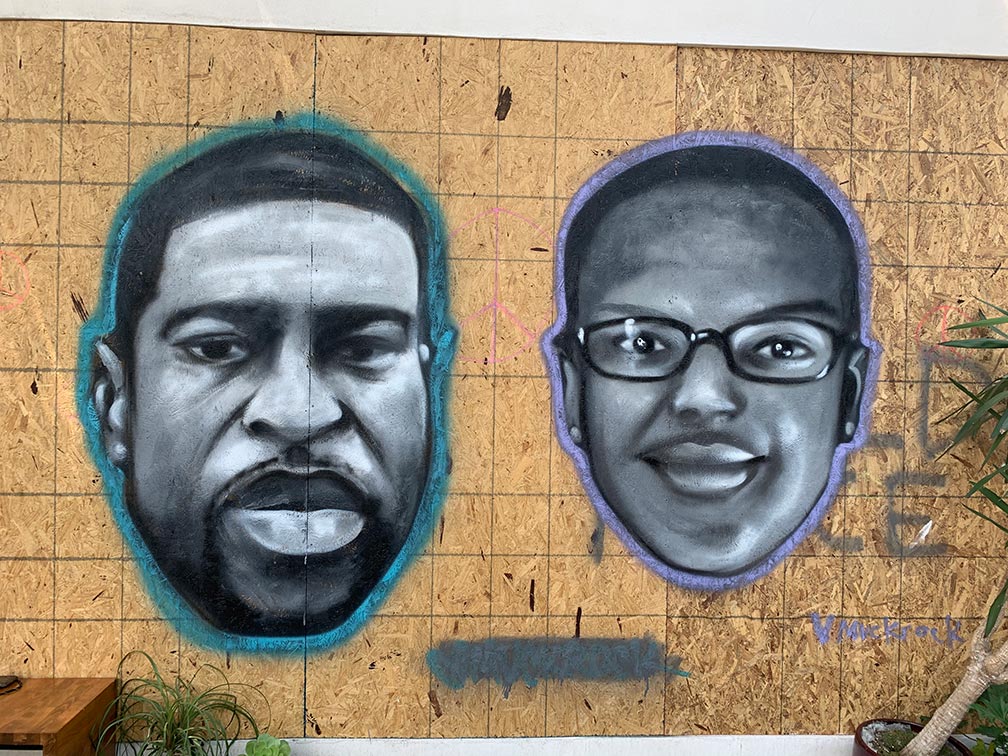 This week, we are featuring When Windows Become Canvases: Street Art for Social Justice.

Astounding numbers of peaceful protesters across America are demanding accountability from law enforcement for the continuous brutalization and murders of Black, Brown and Indigenos civilians, namely starting after the consecutive and mass-publicized murders of George Floyd, Breonna Taylor, and Ahmaud Arbery.

Angelenos have both heard and seen the aftermath of 1992 protests in response to Rodney King’s beating, so it comes to no surprise that LA businesses boarded up their store-fronts in response to looting that has occurred aside from the peaceful protests, which began early this June.

These plywood boards, which otherwise appear as symbols of business-owners fearfully defending their property, have become blank canvases bearing different messages. A dialogue has emerged from them, between businesses owners, artists, and protestors displaying their support for the demands of the Black Lives Matter movement — to end police violence and dismantle systemic racism in the US.

For this week’s feature of We’ll Bring the Streets to You, we’ve highlighted the range of protest art that has surfaced on these plywood “murals” around our HQ in Venice, and beyond.
View here: https://sparcinla.org/well-bring-the-streets-to-you/

We’ll Bring the Streets to You is an online mural campaign by SPARC that makes public art accessible from home during this time of physical distancing. Murals occupy the space and walls as “sites of public memory” to empower citizens to unite, as well as to foster imagination and cultivate creativity. In the time of coronavirus, SPARC is featuring legacy and contemporary murals in Los Angeles that illuminate local histories or address critical social issues that are becoming even more poignant right now. In this virtual tour series, technology makes Los Angeles murals and works of art accessible to a wider community. New mural features each week! Visit https://sparcinla.org/well-bring-the-streets-to-you/​ for more information.
Location:
Online at https://sparcinla.org/well-bring-the-streets-to-you/
Date/Time Information:
Featuring When Windows Become Canvases: Street Art for Social Justice
Monday, June 29th - Sunday, July 5th